Who are the Uyghurs of East Turkestan? 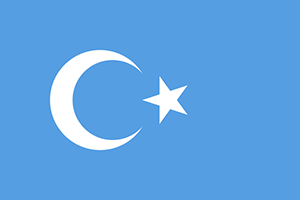 East Turkestan, also known as the Xinjiang Uyghur Autonomous Region of China, lies in the heart of Asia. The current territorial size of East Turkestan is 1,626,000 square kilometers (635,000 square miles), which is a colossal 4 times the size of California.

According to official records in 1949, East Turkestan’s original territories contained 1,820,000 square kilometers of land. The Qinghai and Gansu provinces of China annexed part of the territory as a result of the Chinese communist invasion of 1949.

East Turkestan has a diverse geography. It has grand deserts, magnificent mountains, and beautiful rivers, lakes, grasslands and forests.

A brief history of East Turkestan and its people

East Turkestan is the homeland of the Turkic speaking Uyghurs and other central Asian peoples such as Kazaks, Kyrgyz, Tatars, Uzbeks, and Tajiks. According to the latest Chinese census, the present population of these Muslims is slightly over 11 million; among these, the 8.68 million Uyghurs constitute the majority. However, Uyghur sources indicate that Uyghur population in East Turkestan exceeds 15 million.

Records show that the Uyghurs have a history of more than 4000 years in East Turkestan. Situated on the infamous Silk Road, East Turkestan, Uyghurs’ self-proclaimed motherland, comprises a colossal one-sixth of China’s entire territory, and is widely regarded as a significant crossroads of multiple peoples and cultures throughout history. The Silk Road, loosely defined as the network of trade routes that connected East and West, had a major impact on the development, both economic and cultural, of the peoples and civilizations that existed in lands as far east as China and as far west as the Mediterranean Sea. Through highly complex networks of trade along these routes, peoples, cultures and religions frequently interacted and resulted in the development of unique, rich and interconnected cultures, one of which resulted in the Uyghur group.

The Uyghurs are the indigenous group of East Turkestan. Numerous sources indicate that the Uyghurs were one of the few settled, as opposed to nomadic, ethnic groups in Inner Asia. In other words, the sedentary nature of Uyghur society meant that while other groups, like the Kyrgyz and Kazakh, were scattered across the Central Asian steppe, the Uyghur people were engaged in agricultural production in East Turkestan the earliest, the only group to be permanently settled in the area. Situated along a section of the legendary Silk Road, Uyghurs played an important role in cultural exchanges between the East and West and developed a unique culture and civilization of their own.

Uyghurs embraced Islam in A.D. 934 during the Karahanid Kingdom. Kashgar, the capital of the Kingdom, quickly became one of the major learning centers of Islam. Art, the sciences, music and literature flourished as Islamic religious institutions nurtured the pursuit of an advanced culture. In this period, hundreds of world-renowned Uyghur scholars emerged. Thousands of valuable books were written. Among these works, the Uyghur scholar Yusuf Has Hajip's book, Kutatku Bilig (The Knowledge for Happiness, 1069-1070) and Mahmud Kashgari's Divan-i Lugat-it Turk (a dictionary of Turk languages) are most influential.

Despite the prevailing challenges that face the Uyghur people, the Uyghurs have been able to preserve their cultural heritage, which is rich and unique in traditions and customs of all kinds. Among these are the Uyghur Muquam, which is a series of canonized melodies and musical modes that are played to guide improvisation. The Uyghur Muquam musical tradition has been reveled all over the world for its depth, richness, complexity and individuality. In fact, Uyghur Muquam was designated an Intangible Heritage of Humanity by UNESCO in 2005.

Underlying every facet of Uyghur culture is religion. Although predominately Islam (Sunni), Uyghurs have maintained a strong connection to folk religious beliefs and customs, which has wonderfully blended with moderate Islam and Sufism to form a completely new and unique form of Islam. The many religious customs now incorporated into Uyghur Islamic belief and practice stems from Buddhism, Manacheaism, Shaminism and Tengrism. In addition, the Uyghur people have placed a high value on their native East Turkestan, and so localities in East Turkestan have religious significance.

The Chinese government’s restriction and censorship of Uyghur language materials, including vast collections of Uyghur literature, have perfectly served their interests in assimilating the Uyghurs into Han. Despite these pressures, Uyghur literature is still an important part of Uyghur culture, and Uyghur scholars and leaders have placed a high emphasis on saving this intangible cultural heritage for posterity.

East Turkestan was invaded by the Manchu Empire of China

The Islamic Uyghur Kingdom of East Turkestan maintained its independence and prosperity until the Manchu Empire invaded the nation in 1876. After eight years of bloody war, the Manchu Empire formally annexed East Turkestan into its territories and renamed it "Xinjiang" (meaning "New Territory" or "New Frontier") on November 18, 1884. Uyghur power, stature and culture went into a steep decline after the Manchu invasion.

Heavy-handed state repression of all activities associated by the Chinese government with "Separatism" has created a dire human rights environment for the Uyghur Muslim minority population of northwest China. Beijing has for more than a decade claimed to be confronted with "religious extremist forces" and "violent terrorists" in Xinjiang Province, a vast region one-sixth of China's land area.

Xinjiang is in fact a large, sparsely populated area that has been a site of heavy army and police concentrations since 1949, and is used as a base for nuclear testing, military training, and prison labor facilities. The population of 18 million includes several Turkic-speaking Muslim ethnic groups, of which the Uyghurs, numbering eight million, are the largest. The percentage of ethnic Han Chinese in Xinjiang has grown as a result of government policies from six percent in 1949 to 40 percent at present, and now numbers some 7.5 million people. Much like Tibetans, Uyghurs in Xinjiang have struggled for cultural survival in the face of a government-supported influx by Chinese migrants, as well as harsh repression of political dissent and any expression, however lawful or peaceful, of their distinct identity.

Reports from Xinjiang document a pattern of abuse, including political imprisonment, torture, and disappearance. Mosques are summarily closed and the Uyghur language is banned from use in universities. Uyghurs are subjected to compulsory unpaid labor in the construction of a pipeline planned to export local petroleum resources to other parts of China. Uyghurs also continue to be the only population in China consistently subjected to executions for political crimes, and these executions are often both summary and public.

A handful of small-scale explosions aimed at government targets over the past decade have been repeatedly invoked by the Chinese government, particularly since September 11, in support of its strike-hard campaign to crack down on separatism and terrorism. In policy pronouncements for both domestic and international audiences, the government has sought to establish that all separatism is tantamount to Islamic terrorism, and in fact uses the terms interchangeably. The state's efforts to extinguish the common desire among Uyghurs for autonomy or outright independence appear to have increased the alienation of the population and, some analysts’ speculation, the potential for future violent conflict.