A Chinese government worker in the ancient Silk Road oasis of Kashgar beckons two women to her street side stand and logs their details under the gaze of a surveillance camera. Their offence: wearing veils. The "Project Beauty" campaign aims to discourage women from covering their faces - a religious practice for some Muslim Uighurs, the largest ethnic group in China's Xinjiang region - in an attempt to improve security.

Chinese authorities posted unarmed Uyghur auxiliary policemen at the frontline of an attack on a police station in Xinjiang which left three of them dead before a SWAT team gunned down the assailants, witnesses and family members of the deceased said Friday. The authorities had said that nine ethnic Uyghur youths, armed with knives and sickles, were shot dead while storming the Siriqbuya (in Chinese, Selibuya) police station in Kashgar prefecture’s Maralbeshi (Bachu) county last week in a possible suicide mission.

An audio recording attributing the fatal crash in China’s Tiananmen Square last month to an ethnic Uyghur “jihadi” organization surfaced this weekend on a website that monitors armed groups. The recording, widely reported by international media, will be used by Beijing to justify its repression of the Muslim minority in the western region of Xinjiang and across the country, according to Uyghur affairs experts and rights activists. 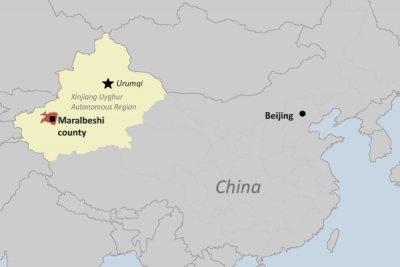