Rabiya Qadeer: I Call on The International Community to Ask The Chinese Government Whereabouts of Muradil Hassan 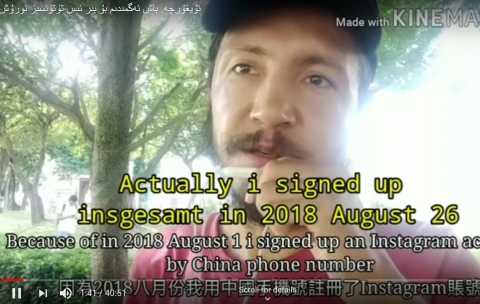 Muradil Hassan, a young Uyghur man who has been living in China proper and exposing the serious political situation in East Turkestan (Uyghuristan) to the world through his YouTube channel, his connection with the outside world has been cut for five  days and his whereabouts are unknown. Muradil Hassan's Uyghur and English statements and his transcript of a conversation with YouTuber Shadman Mahmut  indicate that he fled to the Chinese provinces to avoid being caught in the camp system; Even though he was able to go undetected because he did not use a cellphone, his Uyghur identity has caused him to be unemployed and left on the streets for two years in the Chinese provinces. Unfortunately, even Western companies in the Chinese provinces have not been able to hire him for more than a day for fears of the Chinese government. This means Muradil Hassan’s experience is the experience of a typical Uyghur. His voice is the voice of the Uyghurs in China.

As an activist who has seen and observed the upper and lower strata of Uyghur society, I consider Muradil Hassan to be a hero, who has escaped the strictest surveillance system and dared to rebel against China inside its borders. Muradil Hassan's tragic experiences are one of the strongest pieces of evidence of the current Uyghur genocide. After seeing the disappearance of more than 3 million Uyghurs, Muradil knew he would not survive if he was taken to the camp, he knew that he could not live outside the camps for long, and he knew that he would eventually be taken back to the camps no matter where he is. He made a statement in a clear political voice against China with no fear, as if he were an Uyghur in exile. Muradil Hassan speaks Uyghur, Chinese, and English, he has been closely monitoring the political situation since he was in high school. Muradil fully understands the Chinese state's stance on the Uyghurs; assuming that as an Uyghur, he would face the same fate, whether he was anti-Chinese or pro-Chinese. So, in a statement against China, he did not hide his desire for national liberation.

I was not surprised by the Chinese actions mentioned in Muradil's statements, because they were the kind of terror that I saw and the ones I suffered. What amazed me was that neither the US nor the European companies in the Chinese provinces could not hire a qualified applicant like him for a job because of his Uyghur identity. This clearly indicates that they are complicit in the Uyghur massacre. Today, I urge the international community, especially the western embassies in China and international media, to ask the Chinese government whereabouts of Miradil Hassan and take appropriate action to protect his life.

Leader of the Uyghur National Movement