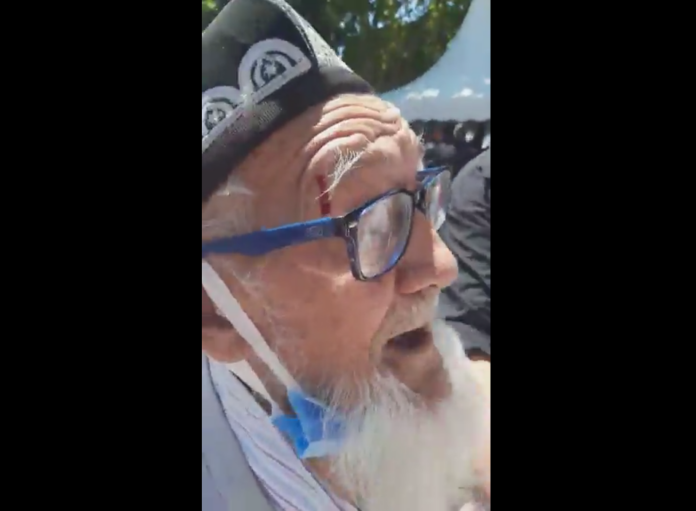 Uyghurs living in Turkey, who have not been in contact with their relatives in China since 2016, gathered at Eyüpsultan Mosque, where President Recep Tayyip Erdoğan will perform the Friday prayer, to ask him to help them reunite with their families.

Prior to Erdogan's arrival, a scuffle broke out between the police and the Uyghur community over the "unfurling of the East Turkestan Flag".

The police told a Uyghur holding the East Turkestan Flag to turn down the flag.

81-year-old Mahmut Tohti Amin, who did not want to raise the flag during the brawl with the police, fell to the ground and opened his eyebrow.

“I have 5 children and 15 grandchildren living in East Turkestan and they have children who have not been able to see them yet. I haven't even heard of any of them since 2016.

We went to our President to make our voices heard and ask him to help us. The police said, "The flag of East Turkestan is not allowed." I was very sorry.

I collapsed in the sudden rush and fell to the ground. My hand hurts so much, my finger is probably broken. My eyebrows opened.

Our hearts are already on fire. I have been living in Turkey for 31 years. I am a citizen of the Republic of Turkey. I went to ask our President for help, this happened. They didn't even want to let him into the mosque. This should not have happened.”